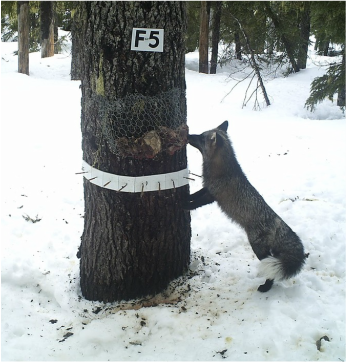 The Sierra Nevada red fox (SNRF; Vulpes vulpes necator) historically occurred throughout the Pacific Crest Ranges of California and Oregon.  During the 20th Century, SNRF populations in California declined precipitously.  At present, only two known populations occur in California with total numbers estimated to be <50 individuals; there is currently little information on the status and distribution of SNRF in Oregon (McFadden-Hiller and Hiller 2015, Hiller et al. 2015), and no data available on their resource selection or space use.  The SNRF is listed as a USDA Forest Service Sensitive species in the Intermountain (R4) and Pacific Southwest (R5) regions and was recently listed as a Strategy Species in the Oregon Conservation Strategy by the Oregon Department of Fish and Wildlife.  In October 2015, the U.S. Fish and Wildlife Service (USFWS) determined that the Southern Cascades (OR and northern CA) and Sierra Nevada (CA) distinct population segments were valid designations, and that federal listing of the latter was warranted but precluded by higher priority actions, resulting in candidate species status.  A proposed rule to list the Sierra Nevada DPS will include a determination on critical habitat.  Click here to learn how we are working to learn more about Sierra Nevada red fox. 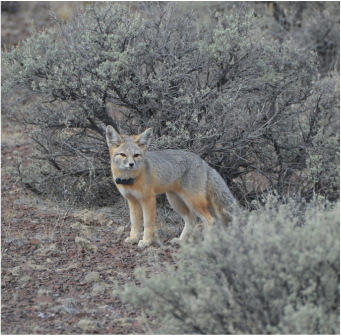 The Great Basin Desert of southeastern Oregon defines the northern extent of the distribution of the kit fox (Vulpes macrotis), a species which became state-listed as threatened under the Oregon Endangered Species Act by grandfathering from the Oregon Fish and Wildlife Commission’s earlier informal list dating from 1975 (Hiller 2011).  The Oregon Conservation Strategy also lists the kit fox as a Strategy Species that is difficult to survey due to its small physical size, nocturnal behavior, and low population densities in the Northern Basin and Range Ecoregion in Oregon (Oregon Department of Fish and Wildlife 2006).  Although records are sparse, there have been efforts to document kit fox occurrence in Oregon using various survey methods (e.g., scent-stations, spotlighting).  Until confirmation of presence during summer 2012 (Milburn and Hiller 2013), the most recent kit fox detection in Oregon was almost 2 decades ago.  Data collected from these ongoing independent surveys are critical, and other contemporary methods (e.g., radiomarking with GPS collars) have been implemented to collect more specific data.  Click here to learn how we are working to learn more about kit fox ecology. 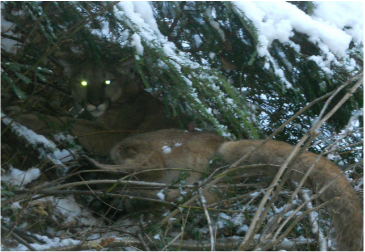 Managing large carnivores, such as cougars, requires accurate assessments of data while making decisions to balance population abundance and distribution with social, political, and economic challenges. We are developing a fully stochastic population reconstruction method and hierarchical Bayesian models to develop population estimates for cougars in Oregon from age-at-harvest data from hunter-harvest and other sources of mortality.

Click here to learn how we are estimating cougar population abundance within each of 6 management zones and statewide in Oregon. 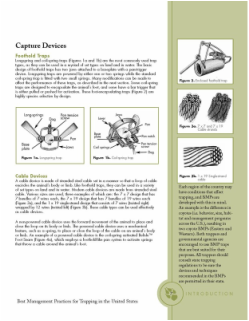 ​The Association of Fish and Wildlife Agencies (AFWA) established the Best Management Practices (BMPs) for Trapping in the United States in 1998 as part of an international effort to evaluate trapping devices and techniques for capturing furbearers, with the ultimate goal of improving animal welfare.  Scientific evaluation occurs through collection of field data under standardized protocols and using those data to determine whether a particular make and model of trap meets the pre-determined criteria related to animal welfare, efficiency, selectivity, practicality, and safety.  One of the goals of the BMPs is the continued improvement of traps and trapping systems for furbearers.  Click here to learn how we are working with AFWA on the BMPs for Trapping.