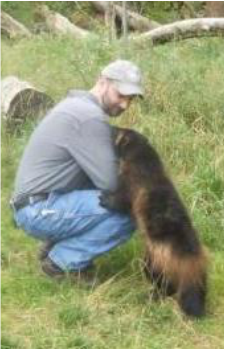 With nearly two decades of experience as a wildlife professional, Tim has both management experience at a state wildlife agency and applied research experience in academia. Consequently, Tim can identify with the social, political, and economic components of agency decision making while developing and implementing research projects. His research interests include a diversity of game and non-game avian and mammalian taxa in an equally diverse array of ecosystems, but Tim focuses on furbearers and galliforms.  Tim has published numerous technical and management plans, scientific articles, and book chapters; served on several state and national wildlife research and management committees; and is Certified Wildlife Biologist® with The Wildlife Society.  Click here to contact Tim. Click here to download Tim's curriculum vitae. 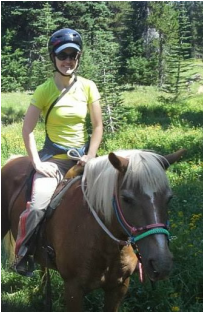 Jamie, originally from Pennsylvania, has been involved with a diversity of ecological projects across the U.S., from federally listed avian species to forest carnivores. She has nearly 10 years of wildlife research and educational outreach experience. Her research interests generally focus on using adaptive management when applicable to improve the efficacy of wildlife management, and how natural and anthropogenic perturbations affect wildlife habitat and populations.  Jamie has extensive field, research, and GIS skills to help meet the Institute’s mission.  Click here to contact Jamie.
​ 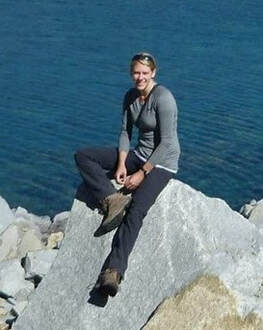 Growing up in western New York, Julia has always had a passion for the outdoors and the animals that live there.  Over the last decade, she has spent her time researching a variety of animals, including bats, rabbits, mustelids, and waterfowl across the US. Her broad research interests include the biology, conservation, and management of small to medium-sized carnivores with emphasis on canids and mustelids, and the use of detection dogs in conservation work. While she enjoys being out in the field, Julia also recognizes the importance of bringing the data back to the office and putting it together to fulfill project objectives. Julia was a Field Ecologist on our Indiana gray fox project, and currently is an Ecologist that plays an important role across many of our projects.
​ 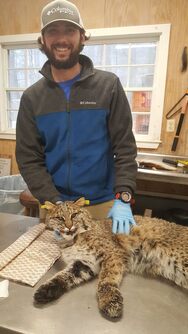 Brandon has worked on a variety of wildlife research and management projects across the country and globe. These projects have allowed him to work with a wide range of mammals, including bobcats, black bears, wolves, coyotes, swift fox, mountain lions, caracals, leopards, and white-tailed deer. Recently, he worked on a bobcat project in northcentral Illinois to assess bobcat recolonization in a Midwestern landscape. His experience working with large mammals and carnivores cultivated his interest in many different aspects of carnivore ecology, including predator-prey interactions, resource selection, reproduction, and population dynamics. He believes in a strong marriage between research and management and wants to develop skills in both practices to use throughout his career. Brandon is a Field Ecologist on our Indiana Gray Fox Project, which covers a wide range of objectives to assess long-term population declines for this species in the Midwest.
​
​
​BOARD OF DIRECTORS
​ 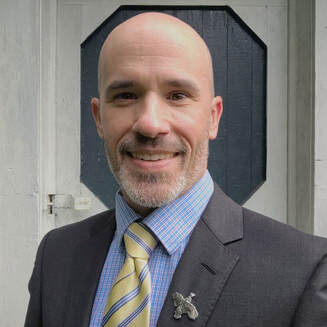 Brent has a Ph.D. in Human Dimensions of Fisheries and Wildlife from MSU, a M.S. in Environmental and Forest Biology from the SUNY College of Environmental Science and Forestry, and a B.S. in Biology from Ohio Northern University. He holds an appointment as Adjunct Assistant Professor of Fisheries and Wildlife at MSU. Brent is active in The Wildlife Society, is on the Outreach and Education Committee with Field to Market, the Upper Mississippi/Great Lakes Joint Venture Management Board, is a former Vice Chair of American Wildlife Conservation Partners, and previously served on the Theodore Roosevelt Conservation Partnership’s Policy Council Steering Committee. 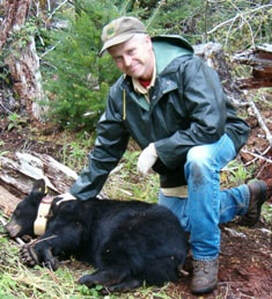 ​Doug Cottam retired from the Oregon Department of Fish and Wildlife in August 2021 as the wildlife division chief after nearly 32 years in various positions.  Doug earned a B.S. in wildlife sciences from the University of Washington followed up with a M.S. in wildlife sciences from Oregon State University conducting research on California bighorn sheep at Hart Mountain National Antelope Refuge in Oregon.  And, finally he earned a Ph.D. from the Pennsylvania State University researching white-tailed deer at Gettysburg National Military Park in Pennsylvania.  Doug began his career as a nongame/urban wildlife biologist with ODFW followed up by a couple decades as a district wildlife biologist responsible for wildlife management along the middle third of the Oregon coast.  Among various hobbies, Doug has been an avid birdwatcher since childhood.
​ 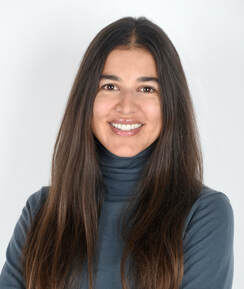 ​Shaun Deschene, enrolled with the Turtle Mountain Band of Chippewas, has been advocating on behalf of tribes for over 20 years through work on economic development projects, land recovery, responsible resource development, and all required associated regulatory processes. Working with the California tribes after finishing a degree at Stanford University, and thereafter, the tribes in the Southwest during and after law school, she is familiar with a variety of tribal nations and their particular issues. She expanded her tribal knowledge base to include first contact East Coast tribes and the relocated tribes in Oklahoma, serving as an intermediary between tribes and U.S. government agencies while in D.C. petitioning for federal acknowledgment, acquiring land into trust, and advancing gaming-related issues. She provides general counsel services to tribes and those organizations and industries that work with tribes. 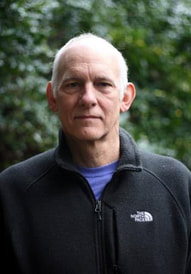 Dave Vesely
Director (2015-2017)
​
​Dave has a B.A. in Psychology from the University of Minnesota, a B.F.A. in Illustration from Oregon State University, and a M.S. in Forest Science also from OSU.  He is presently a co-executive director of the Oregon Wildlife Institute.  Dave has been a wildlife ecologist for more than 20 years, specializing in the assessment of the effects of human land use on wildlife populations and their habitats.  His professional interests include restoration planning for wildlife, natural resource inventory and monitoring designs, and modeling approaches to understand land management effects on wildlife habitats.  He has conducted research on threatened/endangered species and wildlife communities of the Oregon Coast Range, Oregon Cascades, and the Willamette Valley.  Dave lives in Corvallis, Oregon. Thanks for your service, Dave!
​​ 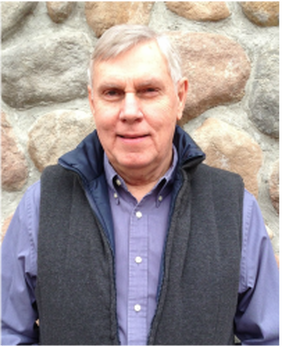 Tom Walker is a native of southwest Iowa. He served in the Army 1967-1970 spending 1968 in Viet Nam. After the Army, Tom attended the University of Nebraska at Omaha, Iowa Western Community College and graduated from Bellevue University with a BA in Business. Equipped with a lifelong passion for all things outdoors, he began a 13-year career as a full-time wildlife artist. Time and circumstances led to other jobs and formal retirement from the Iowa Dept. of Human Services. There was never a retirement from the love of wildlife and art. This will continue a lifetime.
​
Tom witnessed the resurgence of the bald eagle and other species from the DDT era and also witnessed the severe decline of pheasant, quail and gray partridge due to loss of habitat. As a self-taught naturalist, learning from writings of John Muir, Aldo Leopold, Sigurd Olson and many others, he believes things can be fixed or prevented. He believes in research and intelligent application to help solve current wildlife and habitat issues; the quality of life depends on it. Thanks for your service, Tom!
​ 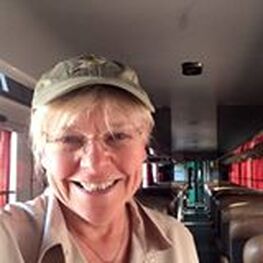 Holly Michael
​Director (2015-2021)
​
​Holly Michael retired in 2015 from the Oregon Department of Fish and Wildlife.  Holly has worked for 40 years across the nation in fish and wildlife research, management, and policy.  She spent the last 10 years as Conservation Policy Coordinator in the ODFW Director’s office.  She is now contracting with the Western Association of Fish & Wildlife Agencies (WAFWA) as Coordinator for the Crucial Habitat Assessment Tool program (CHAT).  This program, covering 17 western states, provides data and spatial maps of fish, wildlife and habitats for use in planning and conservation of landscape-scale projects, and for identifying and managing crucial habitats and connectivity corridors.  Holly was the Oregon Governors’ representative for CHAT from its inception in 2007.

Holly is also the U.S. Co-Chair of the Pacific Birds Habitat Joint Venture, which is an international partnership between the U.S. and Canada committed to conserving crucial habitats for migratory birds.  This Joint Venture has been advancing avian habitat conservation since 1991, in 5 western states and British Columbia.  She also serves as the Conservation Affairs Network Representative for the Northwest Section of The Wildlife Society.  As such, Holly coordinates with several western state chapters of The Wildlife Society (TWS) to advance wildlife conservation policy issues at the national, regional, and local levels.  She is Past-President of the Oregon Chapter of TWS, and served 2 terms as a Board member.  She spends much of her retirement time travelling the world.  Thanks for your service, Holly!

​Andrea Martinez is a sustainable development advocate who strives to promote the coexistence between society and the environment.  She is an international environmental lawyer currently working at the Inter-American Development Bank on enhancing the tracking system to implement recommendations that promote institutional learning and development effectiveness.  Ms. Martinez also assisted the Republic of India, via arbitration, in resolving the Indus Waters Kishenganga dispute with the Islamic Republic of Pakistan – concerning the construction of a hydroelectric dam in the Kashmir area. She is the co-author of Freshwater Law & Governance: Global and Regional Perspectives for Sustainability and of Magna Carta and the Rule of Law. ​

​Former professional experiences include her work at Johns Hopkins University School of Advanced International Studies, the United Nations Environment Programme, the Center for International Environmental Law, the United Nations Economic Commission for Latin America and the Caribbean, and the Organization of American States.  Ms. Martinez has a J.D. from the American University Washington College of Law (2011), where she was the Senior Editor for the Sustainable Development Law and Policy Brief and a B.A. from the University of Massachusetts Boston. Thanks for your service, Andrea! 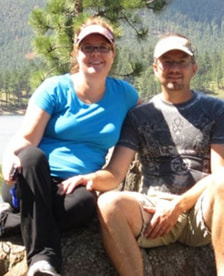 B.S. in Accounting, Iowa State University
Sonja is employed with McGregor Tax & Accounting in Omaha, Nebraska.  She has worked in public accounting for many years,  including experience in non-profit accounting, and previously owned an accounting business.  Sonja and her family live in southwestern Iowa.

Thank you, Sonja, for your service as Secretary-Treasurer!